Maybe we already know this fundamentally. Maybe every person’s soul contains a dream longing to be fulfilled. Perhaps some of us ignore the internal urge deep down in our hearts and forge along a safer path free from big risks—luckily some people aren’t afraid to take risks otherwise we Worcesterites wouldn’t have as many dining options.

Beyond the eight restaurant locations, the group opened the Niche FabLab, a design consulting faction that manufactures customized commercial furniture including everything from bars to weight racks. Bringing us to Covino’s latest venture—Peak Fitness, a 10,000 sq. ft. training facility on Plantation Street specializing in boot camp classes. Fortunately for Worcester, Covino hit all three fortuitous elements required to spark a perfect storm of success and now we have a bevy of concepts to choose from—Mexican, Spanish tapas, burgers and comfort food.

First: let’s talk about timing. In 2005, Worcester craved an exciting new concept to liven up the restaurant scene. Part of that need came from young professionals wanting a little bit of Boston without the commute, the small portions and the overpriced tag.

Second: the funding. Before the housing bubble burst, banks allowed you borrow against your home and gave you access to “monopoly money” as Covino calls it. He admits he knew it was play money given the inflated property values of 2005 but he took out money against his home anyway.

He had been dreaming about opening up his own business since he was a kid watching his uncle’s convenience store afford him freedom—not from work but to make the decisions at work. His uncle could decide what to sell and how to market it.

Factoring in what was at risk, “failure was not an option” according to Covino. They leased equipment, fibbed on a few things and the financing was in place to open the door.

Opening isn’t the victory though. As Covino mentioned when we sat down the first year does not tell you if you have the stamina for success—to adapt, to maintain quality and to consistently deliver a product worthy of people’s clamoring.

Then the third, and final, element of success: unwavering, borderline delusional, confidence.

Not that Mike Covino, or any other successful person, is delusional but bringing those visions we have in our heads into the real world requires constant devotion and faith that our vision will bring abundance, rather than spiraling debt accompanied by heartbreaking failure.

You can’t spend your time thinking about the percentage of new businesses that fail or daydream about a Plan B and then expect to see a thriving business. No, you need to imagine Plan A working and know that you are the exception to every rule.

The first year Covino said he was plagued by anxiety. He wondered why Block Five employees didn’t see the spot on the wall that needed to be fixed or the menu design that was off. And, he would get angry. Long-time employees have reported that in the old days Covino would yell in the kitchen, one time snapping a menu in half. A raised voice seems like a practical response when juxtaposed against the personal risk involved.

Quickly Covino realized that if he didn’t change his leadership style, the business wouldn’t succeed. After that revelation he shifted his focus to his internal customer: his staff. As the employees came together Block Five grew even more.

The most impressive example of this fundamental shift can be seen at many of their current locations since several of the employees who helped open Block Five are still part of the team. Lindsay Brown, who has worked for each Niche restaurant concept, was there for Block Five’s packed opening night.

Brown said of Covino, “He’s done everything he said he was going to do.”
“I remember sitting with him at Block Five after hours and he would talk about opening a Spanish tapas bar and calling it Bocado, which means mouthful,” says Brown. She recalled a similar conversation about his vision for Mezcal, remarking that the company has experienced significant growth in the last few years even though the opening of Block Five feels relatively recent.

In 2005 The Niche Hospitality Group hadn’t been formed yet. After Block Five they opened Bocado on Winter Street and then the original Mezcal on Shrewsbury Street. With three spots open, the group incorporated as Niche Hospitality before the inception of The Citizen and the People’s Kitchen with the Still and Stir in the back. Their other restaurants include Rye & Thyme and another Mezcal, both in Leominster, The Fix Burger Bar on Shrewsbury Street in the former Mezcal location with Mezcal now on Major Taylor Boulevard and two more Bocado restaurants, one in Wellesley and one in Providence, Rhode Island. Moreover, earlier this year they opened the Niche Test Kitchen where they try out new concepts, host special tasting events and prep food for other locations. Now that one restaurant turned into eight locations—nine if you count the test kitchen—taking money out of your home equity line almost seems practical, the way all risks appear when they end triumphantly. There is one snag though. Block Five closed its doors after five years.

How do you celebrate 10 years when the restaurant that started it all, Block Five, closed down? With all this success how did their flagship fail?

Covino explains after they formed the Niche Hospitality Group, he felt the other restaurants had their own “niche” but Block Five didn’t. Their menu included comfort food that was becoming readily available at Applebee’s and other neighborhood chains.

To be set apart, they renovated the space and reopened as The Jewel Box, an Asian fusion restaurant. It closed in four months. The concept strayed too far from its base—and people were left missing Block Five. Taking big risks while reaping a variety of outcomes is all part of the process. There’s no looking back. It’s gone.
But just for this month the original Block Five menu has been resurrected for a takeover at The Citizen and The People’s Kitchen as well as Still and Stir, all at the 1 Exchange Street location. Sampling the menu either for the first time or for nostalgia’s sake is the best way to celebrate the wave of trendy spots Niche bought to Worcester.

For this article, WorcesterScene.com asked for some Block Five fan favorites to try and came back with: the Lazy Ravioli, the Shrimp and Scallop Sauté and the Chocolate Fudge Egg Rolls. We heeded your advice.

I opted to experience the menu the best possible way in my opinion: going to the Still & Stir for a good soundtrack to pair with your meal. To the tune of Madonna’s Ray of Light, I had the Lazy Ravioli, a generous portion of braised short rib, Gorgonzola, toasted walnuts and a ruby port demi-glace.
After some Cyndi Lauper and Whitney Houston, the perfect entrée for the transition from summer to fall: the Shrimp and Scallop Sauté, which comes with roasted acorn squash and cauliflower florets, pignolia nuts, baby spinach over orecchiette pasta topped with marsala cream and shaved Romano and a cranberry reduction.

For the dessert, everyone recommended the Molten Chocolate Spring Rolls. Those are served with a strawberry ginger dipping sauce, white chocolate mousse, and Kahlua caramel cream. While the title doesn’t give it away, I will. There is poundcake inside this dessert spring roll creation, which are perfect to share and cap the night.

The menu takeover runs through the end of the month. If you choose the Still & Stir option, they are only open on Friday and Saturday nights. Of course the The Citizen Wine Bar and The People’s Kitchen are open every day after 4:30 pm. And with that, we wish Niche a happy 10th anniversary. We’re looking forward to seeing what you bring to life next. 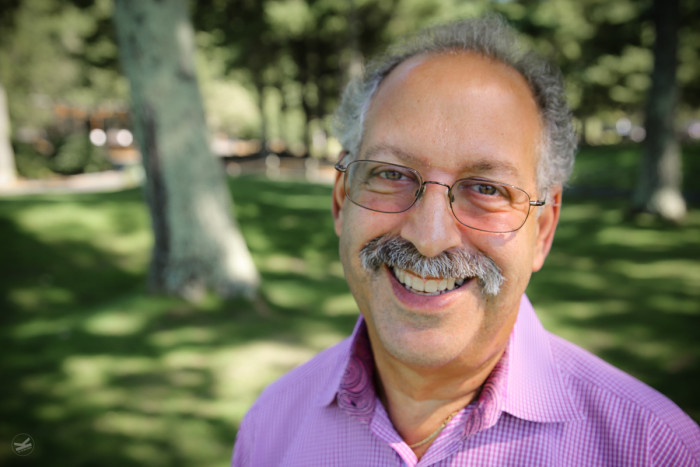 When you think of a businessperson who works remotely from his tablet and strategically plans his time to spend with his new bride, you probably picture an early thirtysomething. You probably don’t think of a man who worked in the Watergate Hotel when they filmed All the President’s Men starring a spry 39-year-old Robert Redford.

Mark Waxler, 60, is taking a page from the Millenials for his new business venture the Waxler Hospitality Group. He is using new technology to advance his career so he can work to live, not live to work.

Waxler spent decades as the Vice President and General Manager of the Beechwood Hotel on Plantation Street. He came to Worcester after years in hospitality working all over from Atlanta to Cherry Hill, N.J. Then a few years ago he met his wife and life changed.

Waxler loves married life but when he worked at the Beechwood and his wife would ask, “What are we doing this weekend?” the answer was always the same: “I have to work.”

Before marriage, he was on his own with no one to answer to when he worked holidays or came home well after the standard eight-hour work day. He welcomed the transition into his new role as husband and stepfather but he felt he needed to make a few adjustments.

Technology has changed our lives and made new ventures more possible than ever before. Waxler knew that could be him too. He left the Beechwood, which felt like a huge leap.

Even though technology is there it’s hard to rewire decades of thinking. Baby boomers were told stay with one company for years, give them everything you have and then retire. Waxler didn’t want to miss out on the best moments with his new wife. Besides he had an arsenal of experience to back him up. That arsenal led him to quick growth. He began reaching out to a plethora of his city connections and soon those first chances turned into referrals.

Now Waxler services a roster of local clients, as well remote clients beyond Massachusetts state lines. His core mission of the Waxler Hospitality Group is to help companies with operations in an effort to increase profitability. The group refers to a collaboration of companies. They work together as a business concierge to help any type of company with credit card processing, energy management and audits, purchasing, computers, Wi-Fi and telecommunications among many other areas.

His team does everything from negotiate rates with vendors to employee training, or retraining in some cases. Working with employees is one of his favorite aspects of the job. “When an employee comes up to me and says they’re experiencing greater job satisfaction because of the work I’ve done, that’s really satisfying,” he said.

According to Waxler, there are four magic words that can turn an oppressive company culture around fast: What do you need? He advises clients to work with their employees and find ways to give them what they need to do their job well. Like the founder of the Virgin Group and titan of business Richard Branson says, “If you look after your employees, they’ll look after your customers.”

While spending time training staff is one of his favorite tasks, Waxler’s years of hospitality experience also help businesses cut costs immediately. Most business owners are stretched thin and don’t have the time or the patience to quibble over phone bills and vender invoices. Moreover, in many cases owners don’t know where to start. The Waxler Hospitality Group scrutinizes every line item until clients can tip over into the realm of profitability.

Nowadays he has control of his schedule, which leaves him with plenty of time for his wife. As we departed Waxler was on his way out to greet his wife with a home-cooked meal after a long flight back from her latest excursion—a puffin tour.